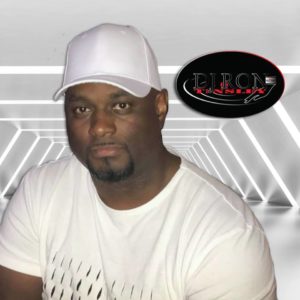 DJ Ron Tins­ley. Born and raised in Chica­go, grew up around dis­co and R&B but he has always had a FLAVOR for many vari­eties of dif­fer­ent music gen­res. House Music grew on him and stuck to him like his skin and he loved it ever since he was intro­duced to it back in the mid 80’s. Tins­ley gives thanks to his cousin Ted Bai­ley and the radio sta­tions on Fri­day and Sat­ur­day nights that would have them buy­ing blank tapes so they could record the newest mixes.
Tins­ley joined the Marine Corps in 1992 and after trav­el­ing the world and doing his part in both wars he picked up spin­ning again while on his 4th deploy­ment he played my first major gig in Hong Kong, Chi­na at the Hard Rock Cafe, again in Guam while port­ed. He was sta­tioned on the west coast in Cali and at the time House Music was still try­ing to make a break­through in South­ern Cali.
In 2012 Tins­ley got orders to the DMV area where House Music is ful­ly rec­og­nized in Bal­ti­more. He then became a res­i­dent DJ on Phillynites Radio for a year and a half before he start­ed play­ing live week­ly sets on FB Live.  Tins­ley would then team up with local vet­er­an DJ John John­son and cre­at­ed JT Soundz and played at var­i­ous venues in DC, Chica­go (Lamelles), Char­lotte (NC) House Music Pic­nic, and made a club in Bal­ti­more (The Crown) their home in late 2016 after play­ing at var­i­ous venues in or through­out the city of Bal­ti­more.  Ron Tins­ley retired from active duty mil­i­tary in March of 2017 and moved back home to Chicago.
Since being back in Chica­go, he has been added to Da Booth 88.9 WIIT FM team with Derek Jones and Rob Waite and became a part of Da Booth Mix 6.  He is also cur­rent­ly a part of a North­side crew called Tripl3 Thr3at and has played at the fol­low­ing venues on the North­side of Chica­go: Twist­ed Can­ti­na, Wise Owl, Estate, Exit, The Rooftop at the Vir­gin Hotel and The Drag­on Room.